There is a problem with parsing the infobox

Charlie is the guest Pygmy introduced in Ep 38: Two and a Half Pygmies. He looks, for the most part, the same as the normal pygmies of Tribe Ookga Chaka, but is slightly crazed and interacts with his environment and other Pygmies rather differently. He is a parody of Two and a Half Men star Charlie Sheen.

As aformentioned, Charlie appears as a slightly crazed Pygmy and has many more abilities than his peers. For the most part, he wanders around the island stating many different catchphrases. His interactions with the world and idle catchphrases fufill the challenges for the episode, allowing the player to obtain the Tiger God.

How to Summon Him

Charlie's normal form is a normal pygmy that has strange eyes and looks crazy, but he can take two other forms. There are a number of sacrifices that don't work for him that ordinarily would kill Pygmies. For example, he will punch away the Meteor/Dinosaur Egg calling himself the "Great Torpedo of Truth", isn't affected by vampires, will launch a shark/half pygmy into space and actually likes to have a Monkey on his back.

If he is placed next to a Pygmy, Charlie will talk about his Tiger Blood and Adonis DNA, transform into the Tiger Pygmy, and slice the Pygmy in half.

He will become the Vatican Assassin Warlock when near a Vampire Pygmy, destroying it, or sometimes when he is near a Pygmy and Storm Clouds are toggled on, summoning Lightning to kill it. Thus, he is the only thing that can kill the Vampire Pygmy, summon lightning, or kill Pygmies in general without very much intervention by the player. 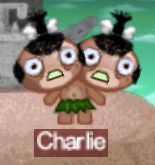 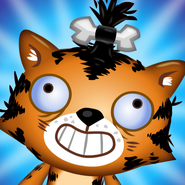 Charlie as a Tiger Pygmy
Add a photo to this gallery
Retrieved from "https://pocketgod.fandom.com/wiki/Charlie?oldid=35117"
Community content is available under CC-BY-SA unless otherwise noted.