The Cocodrink is an alcoholic beverage drank by Pygmies in Pocket God on Facebook. It is found in the Cocodrink Fridge and was introduced in Facebook Ep. 1: Pocket God, antisocial.

It is a halved coconut with a slice of lime and a purple and pink umbrella in it. It also has a blue straw that the pygmies drink the liquid from.

If a Pygmy wants a drink (or is placed there by a player when the Pygmy asks for it by way of a Thought Bubble) he or she will go to Cocodrink Fridge, open it up, and then drink their fill. But it may be obvious that the Cocodrink contains alcohol, because when they are done, they will slam the refrigerator door behind them and stagger around the island as a Drunken Pygmy. It is interesting to note, however, that when the player opens up the cocodrink fridge to stick Pygmies inside there is no cocodrink, but when a pygmy opens the fridge up him or herself, there is one Cocodrink.

A Pygmy reaching for a cocodrink 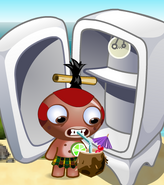 A Pygmy putting away the Cocodrink when it is finished

It is believed that the cocodrink contains alcohol, because after drinking it, the Pygmy will become drunken and will walk drunkenly, burp, laugh at random things, and seem tired. However, it could be that the drink contains little or no alcohol but that Pygmies aren't as strong as resisting its affects. This would explain the similar drunken phenomenon with Root Beer, which doesn't contain alchohol but sees powerful enough to intoxicate the Pygmies.

The cocodrink is involved in a mission to supply cocodrinks to Pygmies that desire one. In addition, answering Cocodrink grace requests is one of the ways to help beat Mother Nature.

Retrieved from "https://pocketgod.fandom.com/wiki/Cocodrink?oldid=34904"
Community content is available under CC-BY-SA unless otherwise noted.