A Cooked Dodo Bird (or a Fried Dodo) is a Dodo Bird that has been cooked in some way. It appears in Pocket God and Pocket God Facebook. In Pocket God, its first appearance was Ep 21: Flipping the Bird and in Facebook it is Facebook Ep. 3: The Birds. It is roasted, looks like roast chicken and is colored light brown.

Also, the cooked dodo bird can be picked up, where it can be dropped back into the water, or can be used to slap the Pygmies. It is also affected by gravity and can be picked up by the hurricane.

The dodo bird was introduced to Pocket God Facebook in Facebook Ep. 3: The Birds. Instead of cooking the dodo bird by the fire, you zap it with lightning (there is no Burnt Dodo Bird in Pocket God Facebook). If you give the cooked dodo bird to a Pygmy when they ask for it via a Grace Request, you will get 1 point of Devotion (2 with the Mother Nature Idol). In later episodes, its appearance was changed from a cripsy brown bird to a more generic, Thanksgiving turkey-like appearance. Strangely, the image of the Cooked Dodo Bird within the Pygmy's thought bubble remained the old image for a couple of weeks before it was updated to the new image.

A Pygmy with a cooked dodo bird Thought Bubble 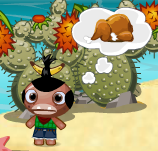 A Pygmy wanting to eat a fried dodo (updated)

Retrieved from "https://pocketgod.fandom.com/wiki/Cooked_Dodo_Bird?oldid=22833"
Community content is available under CC-BY-SA unless otherwise noted.