The Dodo  (also know as  the Bird or the Dodo Bird) is a bird that first appeared in Ep 21: Flipping the Bird for Pocket God and later in Pocket God Facebook in Facebook Ep. 3: The Birds.

The Dodo has a white body, orange eyes, black wings, a large pink/black beak, and a yellow-orange antenna-like object.

The Dodo only appears when the bird icon is toggled on. When toggled on, the Dodo will appear. It will fly around above the island. Tapping it will cause it to drop a 'bird bomb' (poop). If it lands on a Pygmy's head, they will look somewhat annoyed and shake it off. This begins a minigame where you have to hit Pygmies consecutively with bird bombs until you miss. There are achievements for reaching certain numbers of consecutive bird bombs.

If you willdo it like this, you can easily hit 300 pygmies in a row: spawn as much pygmies on one isle. Put the moon instead of the sun onto the sky. Drag and drop the pygmies in a row. The moon should be black on the left side and white on the right side (you need luna phases to do that). The pygmies will dance. The dodo bird have to be activated on all isles to activate the bird bombs. Click on the dodo do drop a "bomb". If the dodo flies above the lined-pygmies, then click as much on the dodo, as the pygmies are under the dodo. Each click will cause a dodo bomb and much clicks causes much bombs.

On Rock Island, the Dodo can be cooked over the campfire and can be eaten as a cooked dodo. Hold it over the fire too long and it will become a burnt dodo. If a Pygmy eats it, he will choke on it and fall into the water.

Also this way it works: let a pygmy fish with a fishing rod. If the pygmy catches a fish and throw it onto the isle, then the dodo (if you choose it) fly down to catch the fish, drag and hold a pygmy above the fish, let the pygmy fall down, if the dodo is nearer to the ground of the isle. If the pygmy fell down and gets disoriented, it can't go away and the dodo have enough time to catch the pygmy instead of the fish.

The Dodo Bird as it appears in the Comics

In the Pocket God Facebook, the Dodo debuted in Facebook Ep. 3: The Birds, which was dedicated to it and the first episode of the Facebook version to be dedicated to a specific animal.

Other than a few minor details, the bird is basically the same, its only interactions being to swoop down to grab fish (or unlucky Pygmies), drop eggs, and be struck by lightning to provide a cooked dodo. However, when hit by lightning it will become a Cooked Dodo instead of a Burnt Dodo. In the online version, the dodo is bigger than the pygmy and can be grabbed when it is attacking a pygmy, unlike in the original Pocket God.

It is not affected by the hurricane or gravity. However, its eggs are, coming out of the bottom of the Dodo before flying towards whichever way is down. As well, when held and then let go, it will drop according to gravity like the shark. In addition, its cooked form, like other food, is also affected by gravity. The rival god that challenges the player when he or she sacrifices too many Pygmies with the bird is SkekDodo. 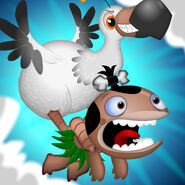 The Dodo Bird being electrocuted

The Dodo Bird carrying away a Pygmy

The Dodo Bird about to take a dip

The Dodo Bird flying across the screen

A Pygmy with a "bird bomb" on his head

Retrieved from "https://pocketgod.fandom.com/wiki/Dodo_Bird?oldid=34277"
Community content is available under CC-BY-SA unless otherwise noted.