Ocean, brought up by the Fishing Rod

The Fish (known as Blue Fish without any customization) is a fish that first appeared in Ep 12: Something's Fishy of Pocket God. It has blue eyes, is colored blue, and is caught with the Fishing Rod. It has a dorsal fin, pectoral fins and a caudal fin.

The fish only appears when the fish icon is toggled on. When toggled on, a fishing rod will appear. If a Pygmy walks past it, it might use the fishing rod. When it is used, a fish's shadow will move across the surface of the ocean. If it moves under the fishing rod's float, the fish will bite the hook, the Pygmy will catch it and it will be flung onto the island where a different Pygmy can then pick it up and eat it alive.

On Rock Island, in Ep 20: Stop! My App is On Fire!, the fish can be cooked over the campfire and can be eaten as a cooked fish. Hold it over the fire too long and it will become a burnt fish, which a Pygmy will choke on if eaten, causing it to fall into the water. The fish can also be cooked in the igloo on Ice Island, by dropping it in the igloo, followed by a Pygmy, who will then cook and eat it.

Also, in Ep 30: Great Job Ice Hole, the fish can be dropped into the ice hole on Ice Island, however, this does nothing. This may have been done on purpose to be a hinderance, as sometimes when a Pygmy catches the fish, when it is flung onto the island, it sometimes lands in the ice hole, meaning you have to wait for another fish.

Also, the fish can be picked up, where it can be dropped back into the water, or can be used to slap the Pygmies. It is also affected by gravity and can be picked up by the hurricane.

Gallery of the Fish 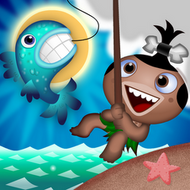 The fish in the "Something's Fishy" icon

Fish in the comic book

Seven Fishes, this is at the end of the Fishmas dance included in the free Fishmas Skin Pack 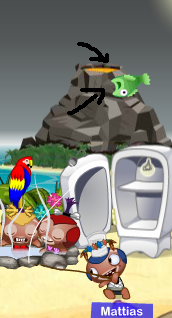 Retrieved from "https://pocketgod.fandom.com/wiki/Fish?oldid=30875"
Community content is available under CC-BY-SA unless otherwise noted.