Not to be confused with the comic series of which the gem is the main focus.

"It is said that when the color drains from the Gem of Life, then so does its power. Which means...the next time we die, it's for good!"
—Klik, Pocket God Comics, Issue 1

The Gem of Life is a large, red ruby that resides in the Sand Island Statue on Sand Island and has magical properties in Pocket God, Pocket God: Journey To Uranus and the Pocket God Comics. It is so important in the latter that it is the namesake of the the first series of the comic.

In Pocket God, if the gem is tapped three times it will shine bright and a loud booming voice will say " You KNOW you like Pocket God!" and any Pygmy on the island will explode. This was an easter egg introduced in Ep 17: Return of the Pygmy.

In Pocket God: Journey To Uranus

In The Gem of Life (Comic Series) In the comic book the Gem has a much more important purpose and is the main focus of the series. It is the the reason for the Pygmy immortality, the reason they keep coming back to life. It is revealed in "A Tale of Two Pygmies" that whenever a Pygmy dies, they will stay dead for a few moments and then pop back into the air next to the Sand Island Statue containing the gem of life. However, in Issue 1, Nooby hides behind the statue which is then struck by lightning, making the Gem fly in the air. The color begins draining from it, which was foretold would happen if the Pygmies began to loose their immortality. To the Pygmies astonishment and horror, they realize if they die once more, it is for good. Therefore they go on a quest to find it, with Ooga eventually talking to the gods and places it on a pedestal where it is healed, restoring the Pygmies's existence.

In A Tale of Two Pygmies

The Gem of Life is involved in this comic series mostly in Part 2 when Ooga attempts to steal it for his side of the disbanded tribe (consisting of him, Booga, and Nooby) from Klik's side (Klik, Dooby, and Klak). Ooga's reasoning behind this is because whenever he, Booga, or Nooby die, they automatically reappear next to the Gem of Life (over in Klik's territory) and half to walk back to the side of the island they decided to make their home. Ooga sends Nooby to steal it, and though it was nooby never actually took it,Klik assumes it was one of them,and goes out to steal it back. It was revealed that Sun had taken it, thinking it was her tribe's Jewel of Life. 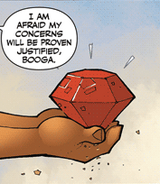 Retrieved from "https://pocketgod.fandom.com/wiki/Gem_of_Life?oldid=28649"
Community content is available under CC-BY-SA unless otherwise noted.