Magic Mushrooms food in Pocket God Facebook. They were introduced in Facebook Ep. 7: Supersize PygMe. They are found on the Purple Mushroom and have magical properties that change the appearance of the Pygmies on Facebook quite drastically.

The Magic Mushrooms appear as a red fungi with white spots. As with the plant it comes from, the Purple Mushroom, the top of the mushroom is triangle shaped.

The Mushrooms have two main interactions with the Pygmies.

When a Pygmy eats a mushroom, the Pygmy then proceeds to enlarge greatly in size, becoming a Giant Pygmy.

The Pygmy being stretched and pulled before becoming the Giant Pygmy 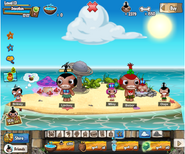 If the Giant Pygmy then has another mushroom, he or she will be shot off into the sky, and zoom around while he is rapidly deflating as air is sucked out of him, and then be slammed back down onto the sand normal size and killed, leaving a crater. The Rival God for killing Pygmies with mushrooms is The Smuck.

A Pygmy zooming across the screen as she deflates

The Pygmy slammed back down to earth and killed, leaving a crater
Add a photo to this gallery

Retrieved from "https://pocketgod.fandom.com/wiki/Magic_Mushrooms?oldid=34109"
Community content is available under CC-BY-SA unless otherwise noted.