The Magic Pumpkin is a food in Pocket God Facebook. It was introduced in Facebook Ep. 10: Attack of the Killer Pumpkin. The global challenge based around the Magic Pumpkin was Jack-O'-Pygmy.

The magic pumpkin is available in the store, under the "Plants" section. With this pumpkin, you can grow a pumpkin plant that will help you to sacrifice more pygmies. If you pick a pumpkin off the plant and let a pygmy eat it, he will immediately turn into a pumpkin himself that another pygmy can eat; this was described on the Pocket Blog as "cannibalism at its finest". On the other hand, you can also pick a pumpkin, let it grow larger, and use it to squash other pygmies.

When it is immediately plucked off the Pumpkin Plant and set on the island, it is a small pumpkin with no stem. Pygmies can eat it in this stage, becoming the pumpkin after they eat it. After some time, there is a burst of slime-green light and the small pumpkin will become a larger pumpkin, which cannot be eaten by Pygmies but can be used to flatten them.

The pumpkin after being plucked off the plant, next to a Pygmy for scale

The second largest phase of the Pumpkin, next to a Pygmy for scale

The Magic Pumpkin can sacrifice Pygmies in two ways.

The Magic Pumpkin can be eaten, but when a Pygmy eats it, the Pygmy will be surrounded by a ring of green slime and then will be turned into a Magic Pumpkin, replacing the one it just ate (a literal interpretation of the phrase "you are what you eat"). The Magic Pumpkin will grow and then it can also be used to sacrifice Pygmies in a different way.

A Pygmy right after eating the pumpkin 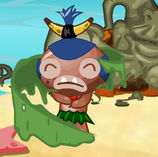 A Pygmy instants before becoming the pumpkin

After the Magic Pumpkin grows it can be used to crush Pygmies. When the pumpkin is dropped on the islanders, only their feet will appear out from below the thing that flattened them. The enormous pumpkin (made by a Giant Pygmy eating the pumpkin, then letting the subsequently created pumpkin sit until it grows) can be used to crush multiple Pygmies, and Giant Pygmies as well.

Retrieved from "https://pocketgod.fandom.com/wiki/Magic_Pumpkin?oldid=33475"
Community content is available under CC-BY-SA unless otherwise noted.