Start a Wiki
Not to be confused with the Zombie Monkey.

The Monkey is an animal introduced in Ep 34: Monkey See, Monkey Chew.

It is brown with black eyes and a curly tail.

The monkeys are similar to the Ghost Pygmy in that you can do many things with them for the purpose of entertainment and/or tormenting the Pygmies. They are called by taking a Banana from the Banana Tree. Three monkeys can be called at a time. If the Pygmy tries to eat a banana, the closest monkey will run up to him and throw him off the ledge. If a monkey eats the banana, he will throw the banana peel on the island which the Pygmies will slip on whenever they walk past. The monkeys can also climb the tree and, if the Torches are unlit, the monkeys will hang out in them for a while until they get bored and jump out. If a monkey jumps on a Pygmy or if you drag and drop a monkey on a Pygmy, the monkey will ride on his back and rip his face off. If you drop a Pygmy on top of a monkey, it will throw the Pygmy back and forth with the other monkeys, or if there is only one monkey, it will throw the Pygmy off the cliff. You can also shock the monkey using lightning and throw the monkey on a burning torch. The monkeys dance as well. At night, the monkeys will disturb the sleeping pygmies by "humping" them. The monkeys will find enjoyment in it, but the pygmies will be disturbed and fight back by punching or kicking. Sometimes, the monkey will be kicked/punched off the cliff.

A very strange glitch will occur when the area is changed when a monkey is on a pygmy's head or being thrown off the mountain by a monkey. Also, when the pygmy is drowning after this and the player switches back to Ape Mountain, it will look like the pygmy is being sucked into a random portal in the mountain. When changed to Sand Island and doing the process stated above, it will look as if the monkey is riding atop of a pygmy covered in fire ants. When changed to Ice Island, it will look like the monkey is riding a pygmy crawling into the igloo. If you change to Rock Island, the pygmy will have certain frames of dancing if changed to this island and the monkey is atop it. If you change to Graveyard Island, the pygmy will become a zombie dancing. This island is the easiest to recognize what is happening as the zombies is blue and, when falling into the water, the zombie is in its complete animation. Nothing will occur when changing to The Underwater Area except the pygmy will be spared. 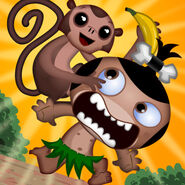 Retrieved from "https://pocketgod.fandom.com/wiki/Monkey?oldid=32602"
Community content is available under CC-BY-SA unless otherwise noted.