Ooga: "No. He didn't save us. He just wanted us to himself."

--Nooby having a conversation with Ooga in the Pocket God Comics.

Nooby is a Pygmy and member of Tribe Ooga Chaka in the game Pocket God, the Pocket God Comics, Pocket God: Journey To Uranus, and Pocket God Facebook. He has the lowest mental intelligence of the members in the tribe. With Ooga, he plays a pivotal role in the comic series and is generally considered a second main character. Because of his legendary stupidity and general lovableness in the comic series and related media, Nooby is probably the second-most famous Pygmy behind Ooga.

In Pocket God, Nooby looks the same as the other Pygmies, wearing a green grass skirt and has black hair with a bone in it. In the Pocket God Facebook version, he wears the same outfit with sandals. He is short, stubby, and slightly pudgy. He has tanned skin with lighter skin around the eyes, mouth and chest/belly and a spot on each side of his face. He has brown eyes and black hair. He has four fingers on each hand and four toes on each foot. He also has a comically large head.

In the Comic Books, Nooby looks similar to the way he does in the game, but has a few bits of hair that stick out, and has only two teeth on his top jaw. He also has freckles on his cheeks. The bone in his hair is broken on one end. He is the shortest pygmy out of his tribe. His eyes are also more of a light hazel-brown than any of the other pygmies.

In the Pocket God Fishmas video, Nooby is still the somewhat dim-witted, slow Pygmy like he is in the comics. He is delighted to receive a Fish for the holiday, and also wishes the viewers a "Happy Hanucoconut" while holding a coconut, a holiday presumed to be made up by the Pygmy himself.

If his accessories (brought by Comic Week) are bought from the store and equipped, he will look like the same as his comic version, yet he lacks his freckles and buck-teeth. When he decided to paint his sandals, he accidentally tore a little on the sides.

In Pocket God, Nooby acts the same as the other Pygmies do. His description says "Nooby is dazed and confused". In Story Mode, Nooby refers to himself in the third person, and frequently misinterprets everything and what anyone says. Nooby almost never understands the references to real life that are in most Story Mode episodes, and replies, "What's a (something)?" Nooby is portrayed as naive, random, and an innocent Pygmy at heart. He has appeared in Welcome to Pocket God, Shake Shake Shake!, Crack is Wack!, Konkey Dong, I Sting the Body Electric, 12 Days of Fishmas, Dance Dance Execution, and Apocalypse Ow!.

-Nooby In the Pocket God Comics

Nooby's intelligence seems to be limited. He refers to himself in third person, pokes an anthill, and is easily manipulated by Ooga to trade places with him, not knowing he would soon be crushed by a meteor. He seems to pay for Ooga's lack of faith a lot, and well as being zapped by lightning while in the outhouse. He seems to be picked on by the gods more than the other Pygmies, but due to his lack of intelligence he seems not to notice anything and continues to be happy and joyful regardless of his torture and abuse by the gods. He speaks almost entirely in illeism.

Nooby is significantly mentally challenged, and almost always cheerful. He says, in The Pygmy Peril, it is revealed that he becomes easily confused when in a conversation, and that he is best friends with Ooga, although the tribe thinks of Ooga as a monster, Nooby says that he does not listen to them. Although he is dim-witted, he can be significantly smart in certain situations, such as, when Ooga, Klak, and Nooby were trying to decode a puzzle, Nooby easily cracked it within seconds. However, he reverts to his usual stupidity afterwards.

Ooga: "Woah. That was pretty smart, Nooby. You got us in the temple.

--Ooga and Nooby talking after solving the puzzle to enter the temple.

In later comics, there might be a sign that Nooby has a split personality, or the mentally challenged part of him is something to hide that he doesn't want the rest of the tribe to know. This was more or less confirmed by the Pocket Blog's post on the Infestation-crossover. In The Pygmies Strike Back!, these things are seemingly becoming a bit true, as he started to make more sense.

Ooga is known as Nooby's bestest friend. Although in the beginning of the comics, it seems Ooga just uses Nooby for pranks and killing him. Though as the comics continued Ooga is shown to actually care about Nooby. He doesn't show it too much though. However, this relationship starts to get strained when Sun comes to the comics. Nooby already has a huge crush on her. Yet, she and Ooga seem to get along better. When they hugged and said they would miss each other, Nooby ran away out of anger. When he saw his anger wasn't good he came back to the island. Ooga apologized to him and the two make up.

Nooby met Sun first in a mysterious cave on his island and had a crush on her at first sight. Once, he sneaked her out of her cage to watch the sunset with her and give her a present made from his leg bone. Unfortunately for Nooby, when they got to the girls' island, Sun and Ooga started to hang out more, causing Nooby to be jealous. He tried to get Sun gifts, volunteer to protect her once, but no avail. He got angry and heartbroken when Sun and Ooga hugged and said how they would miss each other, causing him to run away. In The Pygmies Strike Back!, she and Nooby had very rare or no signs of communication with each other.

Nooby met Darby after he ran away from the tribes. Darby was giving Nooby a hard time. Nooby just wanted to be alone and find Red. Nooby openly showed great dislike for Darby. However, after Darby and him came out of the cosmic way-finder, Nooby's attitude towards Darby changed (much to his annoyance).

Nooby seemed to be a victim of Kinsee's trick, although she also got in trouble alongside with him. But despite of this, he was shown to have consideration for her, because he pitied her when he saw Neeboo burn Kinsee's arm.

Nooby is not often shown to be a capable pygmy, mostly due to his lack of high intelligence. Because of this, he has several weaknesses and only a few advantages. In Issue 3, Nooby is sometimes unaware of dangerous surroundings and doesn't react very quickly like the rest of his tribe. He is luckily saved by Ooga when a monstrous plant was about to eat him. Despite his limited brain-power, Nooby was able crack a puzzle that leads to the inside of a temple, as if he was as intelligent, before being the usual dimwitted pygmy he is. Though despite this, he was also surprisingly useful for his tribe, particularly in Issue 9 where he was able to tame a zombified T-rex (which he names "Chicken"), who was formerly under the influence of Britt.

Like Klak (somewhat), Nooby is easily manipulated (usually by Ooga). He is often told what to do but lacks in fighting skills, however he also serves as a distraction for some enemies. When trying to explain that he isn't "useless" (like what Klik said), Ooga only suggests that he should protect his coconut-friend Wilson.

Nooby in the Fishmas video

Nooby in the 1st issue of The Gem of Life

Nooby points up at the shining moon in the Fishmas video 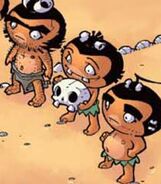 Nooby beside Klak and Booga

Nooby does not want to give up his coconut Wilson

Nooby thinking that the gorillas want to "cuddle" the pygmies

Nooby clashes with Dooby (top) while the others fight each other

Nooby being tied up

Nooby about to get stabbed

Nooby becomes terrified of the environment around him

Nooby nearby a cave

Nooby upon his first meet with Sun

Nooby (top) being captured by the seaweed monster 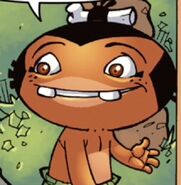 Just plain cute
Add a photo to this gallery

Retrieved from "https://pocketgod.fandom.com/wiki/Nooby?oldid=34692"
Community content is available under CC-BY-SA unless otherwise noted.