Start a Wiki
The Coconut Tree is a feature exclusive to Sand Island and is most likely based on the genus Arecaeae, specifcally Cocos nuficera. It has been with Pocket God ever since it was created, from Ep 1: Nowhere To Go, Nothin' To Do when Sand Island was introduced.

The tree has four dark green palm fronds, a small coconut, and a large trunk that widens considerably at the base with alternating strips of brown and orange. Small green shrubs grow at the base.

The Coconut Tree's only function so far is to bear the coconut fruit. The coconut can be used to bounce on Pygmy's heads, or (when it is split open) eaten. When the coconut is disposed of in any way (ex. eaten, thrown into the water, etc.) it will automatically grow back on the Coconut Tree.

﻿On the Facebook version of Pocket God, the Coconut Tree  is relatively the same but serves some slightly other purposes and functions.

The tree is much thinner and more realistic than its iPod touch brother, with more light green palm fronds and a larger coconut. Also, small grasses and flowers grow at its base.

Unlike the original tree in the iPod version, the player must grow the tree for it to bare coconuts. It will grow in one hour.

The first stage of the Coconut Tree

The second stage of the coconut tree 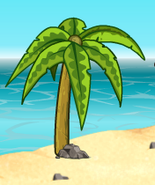 The adolescent stage of the Coconut Tree

The Coconut Tree withers after 10 days of the player not being with it.

A withered Palm Tree
Add a photo to this gallery

The player can drag the top of the tree to the ground and release to have the leaves automatically become hooked to the island by some rope that is connected to a peg. Then, once a pygmy steps on the leaf that is hooked to the ground, the rope will release to send the pygmy flying into the ocean, similar to how the player can flick them off the island. This way of killing Pygmies counts against the rival god The Beast of the Abyss. This method also gets the attention of Nutty McPlasm.

The coconut tree roped to the ground

There is a glitch in the Facebook version that, if the player turns on any other plant in the game without turning the coconut tree off first and the trees take awhile to change, the player can then attempt to turn off the coconut tree manually. If they do that, they will get a waiting symbol in the shop and then, if the player clicks the tree, it will automatically bend down to make the tree trap and slowly rise back up. When at the top, the tree will jumb back to the down position and do it again. The only way to get out of the glitch is to refresh the page.

In Pocket God: Journey To Uranus, the Coconut Tree is located on Earth. As it does not have a Coconut, it has no function other than to be a background feature of the island.

Retrieved from "https://pocketgod.fandom.com/wiki/Palm_Tree?oldid=33980"
Community content is available under CC-BY-SA unless otherwise noted.