Pocket God: Journey to Uranus is an app created by Bolt Creative as a sequel/spinoff to the best-selling iPhone/iPod Touch app Pocket God. It was released on the 16th of December 2010. Until Episode 4, it was an iPad-exclusive app.

The game "Journey to Uranus" was first referred to as simply a mysterious project Bolt Creative was working on. This unknown, top-secret project was sometimes mentioned casually in the Blog posts. However, the teaser graphic to the right was the first thing to give the game a name. When this teaser graphic appeared on the blog, it was clear from the green planet with the constellation of stars above it in the shape of the Pygmy's signature hair and bone that this spin-off of Pocket God would have to do with space and the planet Uranus.

It was then announced that the game was only for the iPad, and soon more information about the game taking place in Outer Space and battling Evil Robots was released. Before the release of the game, the Pocket Blog stated that it is not a remake or sequel to Pocket God but a "spin-off set of mini-games centered around being able to take Pygmies to other worlds." 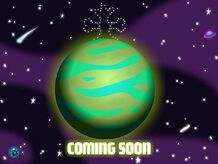 The first-ever teaser image for the game 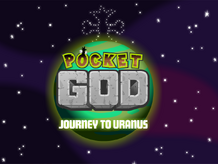 The teaser image verified to show that it was for Pocket God: Journey To Uranus 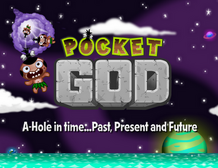 Preliminary Images for the game

In addition, moving from space to a planet with Pygmies makes it so the Pygmies fall through the atmosphere and burn like meteors before they land on the new location. Like Pocket God, "Uranus" will be updated with new features. Dave Castelnuovo of Bolt Creative as hinted at shaders, particle effects, and subtle 3D graphics such as rotating planets and depth to Earth's ocean. The space setting explores ideas that weren't possible with Earth's gravity in real life.It is only unknown if, in the future, the game will have god powers Pocket God never had, or what new dangers the Pygmies will face.

Because it was originally designed for iPad, the interactivity focuses on the iPad's strengths, like the bigger screen and the multi-touch features. The result of this can be seen in details such as smaller name labels on iPhone and iPod Touch to the original Pocket God.

If you drag a Pygmy past the Sky, they will enter Space where they can float around planets because of the gravitational pull of the planet and then visit other planets. If a Pygmy goes to a planet, they will enter the atmosphere (see image below) and then can explore the new environment and new mini-game. You can explore the Solar System with the Pygmies and burn them up against the Sun. The mini-game is A-Hole in Time, triggered by Neeboo sucking a Pygmy into his spaceship and then launching into another dimension. The second mini-game found in space is Quantum Entanglement, activated by "collecting" an Atom - in which the player must drag pygmies over atoms scattered throughout space without taking too long or falling into a black hole.

Earth is a reinterpretation of the Pocket God World. At the moment, there are two islands: Sand Island and Graveyard Island. Sand Island is very similar to its Pocket God counterpart, but it has more 3D elements, is larger, and is rounder. The ocean is different and extends for miles, and the Coconut Tree, Sand Island Statue, and the Volcano exist. This island is home to the Volcano Blast mini-game. Earth is also home to a reinterpretation of Graveyard island, which is bigger, more detailed, and has different decor than in the original Pocket God. It also includes reinterpretations of the Spider Web Tree and zombie Grave, as well as a new feature: the Axe, which allows Pygmies to chop off Zombie's arms, legs, and head.

This is the new sand island from Pocket God: Journey to Uranus

This is the reinterpretation of the old graveyard island used in Pocket God: Journey to Uranus
Add a photo to this gallery

Uranus in a planet in the game Pocket God: Journey To Uranus. It is named after the Roman god Uranus, who was the god of sky. There is currently a dragon theme on this planet, as is evidenced by its mini-game, is wildlife, and its statue. Uranus, as the namesake of the game, was the first planet in space (other than Earth). Its mini-game is called Dragons on Uranus.

Mercury is a planet that resembles a sprawling technological city surrounded by a silver ocean. It has the Mercurian Statue and a tube that leads to its mini-game, Hover Jump. The lightning feature is somewhat different than usual, allowing the player to connect to lightning strands and electrocute multiple Pygmies. This planet is based on racing.

The player can change between day and night as of Journey To Uranus Episode 2: Electric Booga-Loo , by rotating the position of the sun and moons. As well, the Fire Dragon, storm clouds and Uranian Gas with Lightning, and Pygmy naming/God stats have been added.

Besides the obvious fact that they will both star Pygmies in the same tribe (Tribe Ookga Chaka) Journey to Uranus will have updates in which a new planet and mini-game are added. Also, the "Journey to Uranus" planet of Earth is a reinterpretation of the Sand Island.

As this app continues to be updated, information in this section may change rapidly. Here are the current icons for Journey to Uranus: 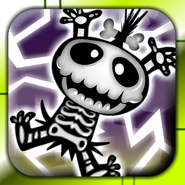 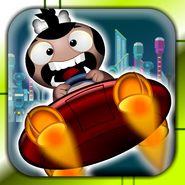 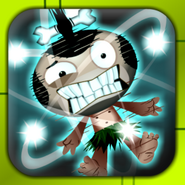 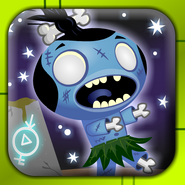 Journey To Uranus Episode 5: Planet of the Living Dead 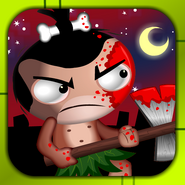 Journey To Uranus Episode 6: Decapithon
Add a photo to this gallery

Retrieved from "https://pocketgod.fandom.com/wiki/Pocket_God:_Journey_To_Uranus?oldid=34908"
Community content is available under CC-BY-SA unless otherwise noted.