Pocket God Facebook (Beta) (also known as Pocket God (Facebook) and Pocket God on Facebook) was an online god game released by Frima Studio and developed by Bolt Creative. It was released on December 23, 2010 on the popular online social network, Facebook.

The goal of the game is to expand the established world in which the player takes the role of a god and manipulates features of islands and their inhabitants, and adds the ability to torment Pygmies with your friends, along with gaining the ability to share your progress and your in-game triumphs in Facebook. The game closed indefinitely on March 20, 2015.

Pygmies have found a new home in the social space with Pocket God on Facebook. More than a simple port of the iPod version, Pocket God on Facebook features unique powers, female pygmies, and the ability to spawn your friends on your island. Participate in special Facebook challenges and see how far you can go!

Before the game was released, an article in Mashable: Entertainment stated "Pocket God for Facebook brings the same omnipotent gameplay to the world’s largest social network, but adds a social twist or two". Bolt Creative has chosen to work with Frima Studios in Canada to develop Pocket God on Facebook. The game opened for closed beta testing on November 30, and the first release of the game, Facebook Ep. 1: Pocket God, antisocial was released December 20, 2010.

The developer and publisher of Pocket God Facebook was Frima Studios, with versions 18.0 platform(s) PC, Mac OS X, Linux (with Adobe Flash installed). The genre(s) of the game, just like Pocket God, is a god game, and the mode is online single-player, online multiplayer. The media/distribution is digital distribution.

After the game reached 1 million players, a whopping 129,770,223 pygmies were sacrificed. The United States rate first on the player density meter, with a full third of the players being American. The next largest concentration lies in the Philippines, where 8% of our players reside. The highest concurrent users playing in one hour is 5,329. The oldest user has conncetced to the game 28 days, or 87% of the game's life since it went live. The ARRPU of Pocket God on Facebook is above $3. A third of all sacrifices ended with a Pygmy drowning, and lightning struck 12,963,796. The volcano erupted some 3,000,000 times. 20,801,195 quests were completed, and half of the 697,487 graces bestowed upon the Pygmies were drinks from the fridges. Rival Gods were provoked and defeated 117,753 times, and The Volcano God was angered more often than the others.

Pygmy Island is a dangerous place... 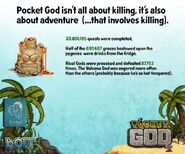 Pocket God isn't all about killing, it's also about adventure (that involves killing.).
Add a photo to this gallery

Since Facebook Ep. 3: The Birds, an origin story has been added to the loading screen for the game to keep the player entertained and amused while the game is starting up. Here is the story:

This origin story being included on the loading screen during the start-up of the game was discontinued beginning with Facebook Ep. 13: Happy Valentine's Slay.

A feature of the Facebook version that was not in the original is Devotion Points. With the devotion meter on, each time you kill a Pygmy some devotion will be subtracted; likewise if you give a Pygmy a Coconut or a Cocodrink when they ask for it a point of devotion will be restored. Also, it takes 5 minutes for the computer to restore 1 devotion point on its own without help from the player giving things to Pygmies. Sacrifice Points, on the other hand, are sort of the opposite of devotion. Every time you kill a Pygmy, the player is rewarded by a certain about of sacrifice points when the devotion meter is turned on. Bones are also a currency, but are more rare than sacrifice points and are only rewarded for leveling up. The player recieves one per level they increase, but can also buy them for real-world money.

These are three separate things that players do to keep themselves busy in the game. Quests, or missions, are single-player only. Completing their objectives helps you advance in the game (ex.: kill 5 pygmies with Lightning). Challenges are issued by Rival Gods, and your friends can participate if you ask for their help. Global Challenges are special challenges, generally issued during special holidays and in which everyone can participate. The rewards can include sacrifice points, experience points, idols, clothes, etc. Sacrifice points and XP are shared between all players based on level of participation (like normal challenges), while idols and clothes are awarded to all participants.

Pygmies are the main focus of the game and can be killed in a variety of ways. However, the Pygmies added in the Facebook version are much more high-quality, and as they are not part of Tribe Ookga Chaka there are some added Pygmies, some of which are female. Their names vary by the player. In addition, as of the fourth episode, the player now has the ability to customize the appearance of the Pygmies, which includes their grass skirts and hair bones. This customization also includes switching the gender and changing the name of pygmies.

The following are some Pygmies found in the Facebook version:

The features of the Facebook game are either unlocked when you reach levels or bought with Sacrifice Points or the real-money Pocket Change. The god powers on the game are Gravity, Lightning, Hurricane, Lunar Phases and Hailstorm.

In addition to these, geological features have been added to the island such as the returning Volcano and the new Tar Pit, Hot Spring and Geyser.

Devices are things that the player can build to enhance (or worsen) the lives of the Pygmies. The available devices, so far, are the Cocodrink Fridge, the Fishing Rod, St. Pat Fridge, and the Weapon Rack.

The plant life in this game differs from the original verison. The Palm Tree, known know as the is the Coconut Tree returns a new appearance and a coconut, but the inflating Magic Mushrooms, Pygmy-eating Venus Flytrap and explosive Bomb Cactus are two new plant features.

The animal life on the island is the Shark, Dodo Bird, Fire Ants, and the Unicorn with three involved in the original game and one not (The Unicorn), they are very similar in their interactions with Pygmies. The Fish from Pocket God has been replaced with the Orange Fish, but is not considered part of the animal category because it is toggled on and off with the Fishing Rod.

New dances are added for the Pygmies such as the Irish Dance, Dance Dance, Young Pygmies' Devotee Association, but too much dancing will lead them to a death from exhaustion. The dances used to be considered God Powers, but after the addition of more than just Dance Dance they were expanded into their own category.

Idols are a new feature of this game. They provide the player with extra boosts and help in the game. As of Facebook Ep. 4: Dressed To Kill are divided into two categories, Rival God Idols (see below) and Power Idols. The Power Idols are are the Basic Idol, the Idol of Wisdom, the Idol of Sacrifice, the Almighty Idol, the Foreman, Green Thumb Idol, Faith Booster, All-Knowing Idol and Bloodthirsty Idol. They all resemble either a large beetle, a pygmy-like sphinx, or a creature with a feathered headdress and each has a certain type of gem on them.

A Rival God will challenge the player when the player overuses its respective power. The challenge will involve sacrificing a certain number of Pygmies in that rival god's specific way in a certain amount of time. If defeated, the player will be awarded an idol for each god they defeat. The rival gods (and idols, if the god is defeated) are Fat Cupid, Moonface, Mother Nature, Sharky White Teeth, SkekDodo, Steamy, Stormy the Snowman, Tar Fossil, The Beast of the Abyss, The Galley Master, The Unindentifiable Leftover Monster, The Volcano God, The Warmonger, The Yoga Master, the Venus Queen, the Wind Dragon, and Zeus the Old King, The Skull Army, The Smuck, Kali, The Night Mare, Spider Mamaw and Aquapella.

Boosts help the player in a number of ways, such as giving them more devotion or letting them sacrifice more than five friends a day. They are the Puny Soul Potion, the Reaper Potion, the Armageddon Potion, the Miracle Growth, the Mercy Hammer, the Grace Period, Dodo Down and Kalima's Heart. All this boosts cost Bones.

Retrieved from "https://pocketgod.fandom.com/wiki/Pocket_God_Facebook?oldid=35028"
Community content is available under CC-BY-SA unless otherwise noted.