The Root Beer is a beverage that the Pygmies drink on Pocket God on Facebook. They are found in the St. Pat Fridge.

Root Beer is a jug of foaming, reddish brown root beer. The Pygmies slop a lot of root beer on themselves as they drink it, and then wipe their mouth when they are done. It is believed that root beer in Pocket God, although not in real life, contains alcoholic content, because after drinking it, a Pygmy will become a Drunken Pygmy and will stagger around acting like a stupor, burp, laugh at random things, and seem tired, the same thing that happens when a Pygmy drinks a Cocodrink.

In light of Saint Patrick's day, a worldwide challenge was sent to all the players (as it was for Valentine's Day with Fat Cupid) for them to answer as many Pygmy requests for root beer as possible. The challenge was reached, so the fridge and its root beer were able to be kept for free.

The Saint Patrick's Day Message
Add a photo to this gallery 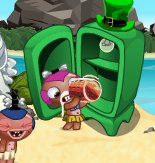 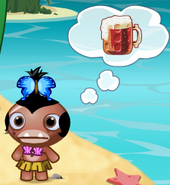 Retrieved from "https://pocketgod.fandom.com/wiki/Root_Beer?oldid=28896"
Community content is available under CC-BY-SA unless otherwise noted.